Google Inbox is a glimpse into the future of email. I love the way it wades through mountains of content and pulls out the important bits. I like thinking less about messages and more about tasks. It’s not clever enough yet, but when it is, I’m sold. 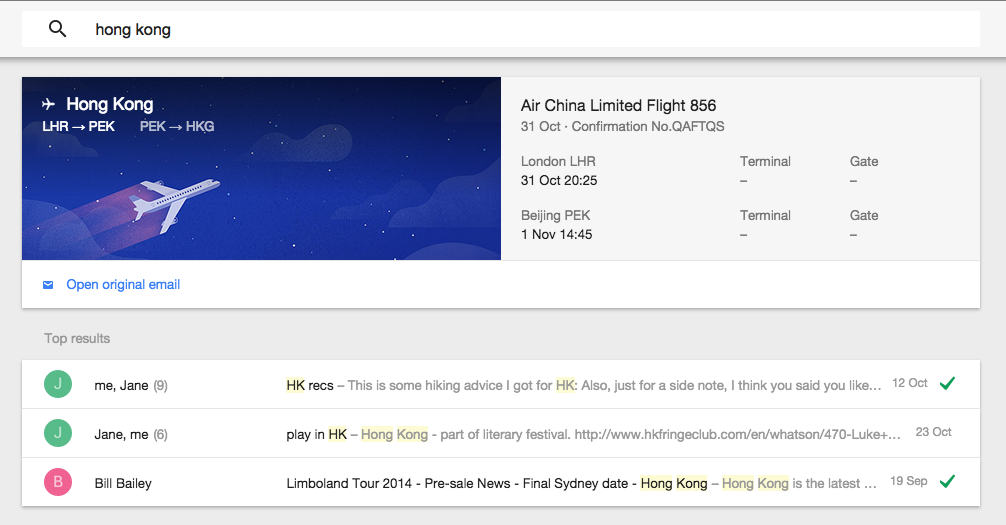 It makes sense that Google should create a new product to continue the evolution of GMail, which suffers from a similar problem that Microsoft has had with Word and Excel. People get so tuned to the way a product works, all the keyboard shortcuts, button locations and power user features, that you simply can’t change anything without alienating a generation of users. For example, my friend Lisa gets annoyed with Microsoft for mocking her use of outdated Excel shortcuts.

At their heart, most email clients have for a long time been about messages. Then they started getting smarter and became about threads. But that wasn’t much of a leap, and there’s been a bigger revolution coming for some time. You can see glimpses of it in some recent updates to GMail, like the ability for emails to embed metadata to place actions in the thread view:

This starts to make email about specific types of tasks or events and less about generic threads. For example, at the top of this post is a shot of a search of Inbox for “hong kong”, which immediately shows me a card for an upcoming flight, for which I presumably have a confirmation email from Air China buried somewhere in my inbox.

Nice. But this kind of intelligence brings risks too. What if I change my flight? There’ll be a flight change email, but will Inbox recognise it, and realise that it invalidates the prior standard flight confirmation? What if the airline has a standard format (with the required embedded metadata) for flight confirmations, but conducts amendments via personal contact with a customer service adviser?

It’ll take a long time to build up the necessary intelligence to make the time-saving magic something you can instinctively trust. As another example, here are two searches for purchases I made today, which Inbox treats differently:

Neither of these is ideal. Although the hat I ordered from Amazon is flagged up on a nice-looking card, along with the clever addition of the tracking link and estimated delivery date, it misses the fact that I ordered four things from Amazon today. Showing only one of them could be considered more misleading than helpful.

Ocado (a grocery delivery service) is stranger. It’s obviously not known to Google or isn’t including sufficient metadata in their emails to be auto-awesomed by Inbox, but in fact, the top hit email in Inbox has an iCal event attached to it (for an event in the next few days), so why isn’t that automatically creating a top-result card? Most bizarrely, if you open this email in Inbox, there’s actually no sign of the attached event at all, whereas in GMail, it gets flagged right at the top:

Inbox does other cool stuff too, for sure, like bundling, where messages of similar types are grouped together automatically. This is not really anything new – GMail has been doing that for some time, though the UI is evolving nicely. And the snoozing feature allows you to make an email go away for a bit and come back later. For me, snoozing isn’t helpful to my workflow, but it’s close to something that is: delayed send.

Snooze them, not me

I’ve used Boomerang for a while now. I may want to send a reply to an email right now, but don’t want to provoke an immediate response back at me, or if it’s after hours I may want to make sure my reply arrives during the business day. Or maybe I want my email to arrive at a very specific time to coincide with an event in the recipient’s schedule. This is kind of like applying a snooze to the email on behalf of the person you’re sending it to.

But overall, by far the most interesting thing about Inbox is the way it pushes threads into the background and is smarter about surfacing information. It’s an immense challenge, and there’s no-one better than Google at doing this stuff, but it’ll still be a long time before I can completely trust a system that reads all my messages and declares that it has the one definitive answer.